The politics of Uganda in the last 30 years has been mainly dominated by a criminal out-fit called the National Resistance Movement. 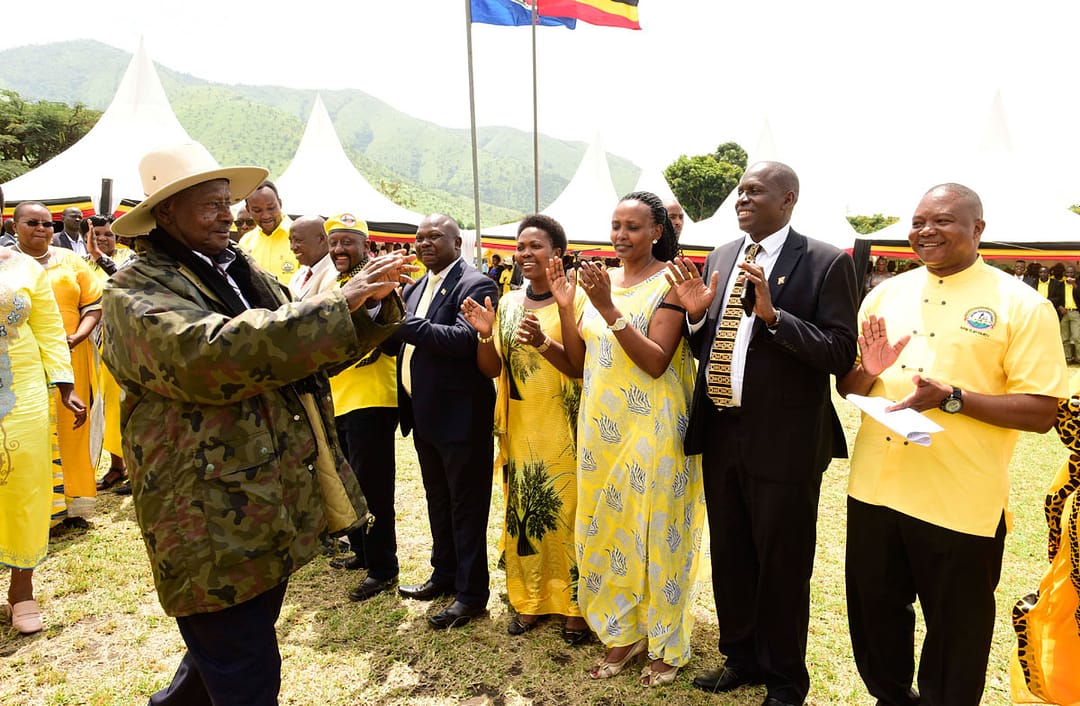 Though the NRM criminal out-fit has been able to create another out-fit called the Forum for Democratic change, their objective and agendas are similar. Its to dominate power and kill-off genuine democracy in Uganda. Their main belief, is about owning power, silencing criticism and keeping power among their ilks.

In fact, its very common for FDC supporters to get character references from Yoweri Museveni when applying for Jobs in UN, OXFAM,etc.

The democratic process in Uganda, has become sterile due to the self importance and militarist ideologies of both Dictator Yoweri Museveni and Wannabe Saint, Kizza Besigye Camps. Both camps have created a distorted narrative that its only the two scumbags that have leadership qualities, and the rest of Ugandans, don’t. To the extent one is refereed too, as the father of the nation and the other father of the struggle by their cult members. Total Nonsense!

If we already have a hereditary system of leadership within Uganda tribal kingdoms, then why should we have one in the republic of Uganda.?? Both the opposition and government seem to share the trait of life leadership. Without a doubt, if today Kizza Besigye was to be given state power, overnight it would turn into an absolute dictatorship.

The Uganda political class is the only one in the World, that lacks a developmental project for the people. However, this’s understandable as Uganda is a great fuck (Kyimpe Nzineko) for foreign crooks that have no bother for a developed African nation, but their lifestyles and offshore bank accounts.

Because 85% of the Uganda society is poor and have no access to open-source media. Thus, building democracy through mutual consensus is very problematic. That’s why the political class can come across as having a popular support base-because their Lackeys are able to manipulate shares and likes on twitter and Facebook.

To even make matters interesting, some of them have listed on their political CVs as very good with twitter and Facebook and have won numerous awards for having many likes on a Facebook. With that type of information, the patronage media is able to manipulate the public opinion. Today, access to the Internet is in the hands of a few vocal individuals that happen to belong to the parasitic political class, and can afford to pay Social media tax.

Fellow Compatriots, Uganda is not a property of any Political Party, Class, or tribe,Militia, etc.  but yours. The notion that someone has attained a bundle of colonial education papers and has served imperialism in different capacities, and are now automatically better than you, is indeed a form of mental slavery.

The most corrupt people, that have mastered the art of embezzlement, tend to be holders of colonial education papers. Today the greatest war criminals and hardcore thieves in Uganda, have attended and mastered colonial legal practice. ie. Jim Muwhezi, Amama Mbabazi, David Tinyefuza, Moses Ali,etc. are their colonial education papers value to development of Uganda? Of course not. But a tool to defraud Ugandans , and also to build their hollow egos.

The reason why Uganda institutions are still underdeveloped, is because Ugandans have become too dependent on colonial brains to solve their problems. The capacity of innovation and creativity is not based on one’s education bundle of academic papers, that was attained from western institutions. But the hunger and will to solve problems. Thus, Western Colonialists did not invent Science,Mathematics, Law, Art & Design, but stole it from your ancestors.

The main weakness on the Uganda political landscape is with the opposition-the opposition in Uganda is mainly made of holders of colonial academic papers. Their actions of opportunism and manipulation is not accidental, but deeply ingrained in their DNA -they mostly built their careers serving the Uganda National Resistance Movement Criminal out-fit of Dictator Yoweri Museveni.

But when they fell-out of favour with their boss, they then hijacked the traditional opposition politics, but still maintained strong links with notorious killers of the criminal outfit. This has not been helpful at all to the politics of Uganda, but created very many little fucks in the opposition, claiming to represent the people. Thus, they’ve managed to manipulate the public through media patronage by dominating the real issues that face Ugandans, and instead promoted their self-importance.

That’s why you’ll find them exploiting funerals, weddings, and other civil functions, to spew their smelly politics. That’s how heartless Uganda politicians have become. I wouldn’t mind mob justice on politicians that bring politics to funerals.

The political situation in Uganda has always been crap and pathetic, as its the same class of parasites, always manipulating and taking the populace hostage. I’ve followed and tried to work-out the political system in Uganda since my childhood, but it gets worse everyday. Uganda still has ministers that served under Idi Amin’s regime, still holding powerful ministerial portfolios and directing security services. War criminals that are responsible for crimes against humanity in Uganda,Rwanda,Congo,Sudan,etc. are now being fronted by the patronage media, for civil society and political leadership.

In-fact anyone known to advocate for justice for war crimes victims in Congo and Rwanda is considered a state enemy-its almost rare to come across Ugandans engaged in advocacy for victims. Today the main architecture of Ituri  brutal murders is the Inspector General of Uganda Police, General Karekezi(kale) Kayihura, and we should not also forget that its him that facilitated Bosco Ntaganda aka, the Terminator.

What is the use to even bother voting for the same..same murderous, corrupt, backward thieving parasites. Uh? The entire political system needs dismantling by any-means necessary- as voting is a waste of resources and time, because the same parasites will always find their way through. Its like a broken sewer pipe, every-time someone flushes down their shit, it splashes everywhere into the neighbourhood.

For sometime we did give a chance to the political class in the opposition-the silent majority thought it was better to let them wake up from their cosy cesspool naturally, but its now been three electoral processes taking place, and the bad stench is still around and has even got worse. We see the same frogs taking our people for fools on a fourth process. This has got out of hand …. two nasty frogs are now indirectly being empowered by the regime and imperialism is fitting the bill.

That’s why I decided to come up with my own format of political frogging…this came up after realising that the fake Uganda Opposition contestants, have a facial similarity with the old frog. If those frogs can take Ugandans for a ride, then a better frog is waiting  for them.